Ideas for how to start a listening project

Start a conversation about actively listening.
Talk about different listening styles.
Interview someone you know or don’t know about listening.
Actively listen.
Listen to yourself/ other people listen.
Listen to your body.
Listen with your body.
Eavesdrop on a conversation.
Take a field recording of your day; go home and listen to it with your eyes closed.
Listen to your friend’s stomach with a stethoscope.
Let someone finish his/ her thought or sentence before adding yours.
Listen to music – imagine it is food.
Add your ideas to this list.
Posted by Melissa Wyman at 2:31 PM No comments:

The Big Fish Book of Listenings 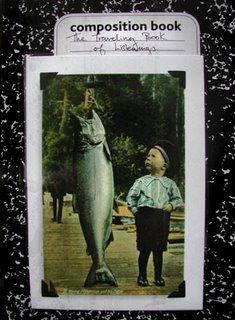 The Deer Hirsch by Wolfgang Tillmans Book of Listenings? 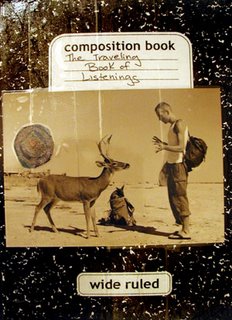 Where is the Breaking Hearts Book of Listenings? 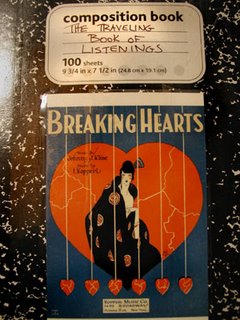 Where is the White Mask Book of Listenings? 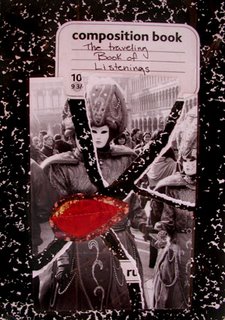 Where is the Gut Suitcase Book of Listenings? 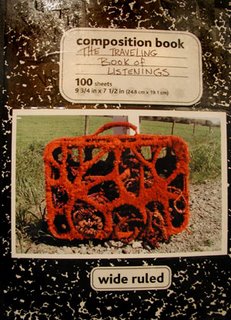 Where has the Fairtrade Coffee Book of Listenings been? 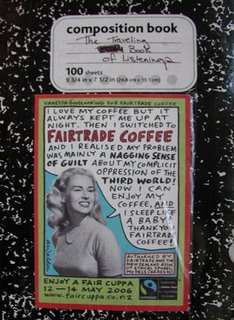 The Traveling Books of Listening

These books will be in circulation from one person to the next – going wherever they get handed to – being added to along the way and hopefully at the end of January 2007 I will get an e-mail from whoever has one of the books and they will be returned.
Posted by Melissa Wyman at 6:29 PM No comments:

I’ve been actively listening for 28 days

They know all about you...

Melissa,
These were articles sent some time ago about the information that google stores and would like to store.
It got me thinking though about a further step to listening - what happens afterwards? What is the relationship between listening, and then re-telling? Where does the boundary between public and private lie? Do we really say what we mean? Should we always say what we mean? Should we say it anyway and understand that the listener can read between the lines to hear our emotions rather than our words? And does this mean that listening is more than just opening your ears?


Every time you use an internet search engine, your inquiry is stored in a huge database. Would you like such personal information to become public knowledge? Yet for thousands of AOL customers, that nightmare has just become a reality. Andrew Brown reports on an incident that has exposed how much we divulge to Google & co

Have you heard/ seen any Listening Projects recently?

What's in a name?

Welcome to the Listening Project
Provides information and training to people interested in using listening to help others explore attitudes towards the war in Iraq.www.publiclisteningproject.org/

The Elephant Listening Project
A project which assesses the potential of acoustic monitoring for evaluating the abundance and health of elephants living in the dense forest.www.birds.cornell.edu/brp/elephant/

Justice and Witness Ministries: The Listening Project
Although we prefer face-to-face meetings, below is a brief form to enable you to participate in the Listening Project. Take a moment to offer your ...www.ucc.org/jwm/listen.htm

Listening Project on Security and the Cost of War
The American Friends Service Committee (AFSC) is a Quaker organization that includes people of various faiths who are committed to social justice, peace, ...www.afsc.org/pittsburgh/listen-security.htm

A Listening Project: Taking Victims & their Advocates Seriously
Prepare fresh natural foods in all seasons with Simply in Season a cookbook by Mennonite Central Committee. Buy it and other natural food cookbooks and ...secure.mcc.org/mccstore/index.php?main_page=product_info&products_id=334 - 28k - Oct 15, 2006

Interfaith Listening Te ams
Our partners around the world. have been invited to share their experiences of responding. to the challenges of Christian-Muslim ...www.pcusa.org/peacemaking/intl/IntFaith.pdf

Restorative Justince Online
The Listening Project sought to include the voices of victim advocates in the development of restorative justice practice. The article below is an excerpt ...www.restorativejustice.org/editions/2003/April/listeningproject

What are you listening to

at this very moment?
Posted by Melissa Wyman at 9:01 PM 13 comments:

Neil/Bob: have quick question
its about how to document it (the listening project)
and how not to drive it too much
one way might be to document the changes in yourself
a kind of subjective experiment

...to document the changes in other people.
we were both surprised at how we noticed our listening was
in some ways self-centered
this is social practices
so some impact on society is probably a good thing, no?
effecting a change n' all that?
but it's not free from mediation
which i think you were interested in doing
Posted by Melissa Wyman at 11:06 PM 1 comment:

from one of the listening interviews...

Communication between two people is a complex nexus of psychological and discursive interaction. Though I would be skeptical in invoking Nietzsche, as I don’t understand his philosophy well, I am reminded of the idea of the Will to Power, that as humans we are constantly trying to manifest our personality. When we talk, we at least want recognition of the validity of our thoughts and feelings, we want not only to be heard, but recognition that it is okay to voice these thoughts. When we are not heard, we feel ignored or socially marginalized.

Posted by Melissa Wyman at 10:44 PM No comments:

Neil/Bob: Listening is an interesting form in the contemporary political climate
you have the patriot act which allows the government to listen in on its people
yet abroad the US is doing most of the talking
part of its role as a global hegemon I guess
I wonder what would happen if it really listened to what people are saying
what would it hear?

me: This is good - can I use this? You don't have to be named as the speaker

Neil/Bob: go ahead -def no need to name me
I am already fearful of the new powers in the US!
maybe that listening vs hearing contrast is one you could work with
my feeling is that the govt is enabling new powers for listening in
but it isn't really hearing what is being said
if you listen closely people may be saying
we're hungry
we want to live our way of life
with our own culture and religion
as with all politics it is how we balance all those things

me: who is speaking?

Neil/Bob: good question
what isn't being said?
me just talkin out my butt

me: no – this is good dialogue
I've been looking more at people's personal experiences with listening-
though the reason for it is much broader
and it IS in relationship/response to the current political climate

Neil/Bob: one of the things that Ralph's book impressed upon me was that
"standing close to listen" thing
in Western rationalism we try to objectify
"standing back to look"
it is a way of accessing information by standing back to remove ourselves and feeling from something - like scientists
it is our cultural belief that doing so yields more knowledge
and allows us to create high-rise buildings and all that stuff of modernity
governments based on rational-legal authority etc
but Ralph's thesis is that this is only one way to access knowledge of the world
of the many others there is the idea of "standing close to listen"
what is it that people are saying
you can see this eVERYWHERE
one of the problems of DEvelopment Studies
which I was interested in
is that it has this cultural superiority
that Africa is poor because they don't know what they need, they don't have the Western rationalist scientific knowledge
BUT
if you stand close to listen, and ask locals what it is they need for their villages, farms etc
though they won't use the same terms
(marginal cost, average cost, etc etc)
they will have an acute understanding of what they need
though it may be expressed in terms of religion, culture, environment
or in a mystic language or some kind
we just aren't listening to them
for example, some farmers on the African continent have been raising cattle etc for dozens and dozens of generations
why should a western theorist come in and tell them what they need to do to improve their situation
they almost certainly know
Posted by Melissa Wyman at 2:28 PM No comments:

The title of this project could be The Effective Active Listener of Irrelevant Information.


One of the reasons that I drive a diesel car is
because every time I start it, I have to listen for a
handfull of seconds. When you turn the ignition on,
you wait for the glow plugs to heat up and then switch
off. The solenoid makes a very quiet "click" .

IMHO, listening has got nothing to do with
preconceptions or ideas. Waiting for an entrance into
a converstion is not real listening. Listening is more
about the "small, still voice within"- the one that
rarely gets heard by anybody. shouted down

Nobody is listening to anybody or anything. Robert
Crumb drew it.

In my conversations with people so far in regards to listening in our society, I have leaned that many people feel that they have to tune out most things that are happening around them in order to focus. A few issues relating to listening have been raised again and again in my conversations so far with the public. I have learned that we listen, actively listen, with a goal in mind – we listen to learn (about something in particular), listen to gain certain information (about something relevant or interesting), listen for what we can comment on or critique, listen because the person speaking is relevant or interesting. One point came out that I found interesting is that listening sometimes happens to fill the gaps between when we can say something. How about engaging in irrelevant listening for the sake of listening?
Posted by Melissa Wyman at 10:18 AM 3 comments:

I listen to learn
I listen to hear
I listen because I need information to survive
Posted by Melissa Wyman at 12:48 AM No comments: 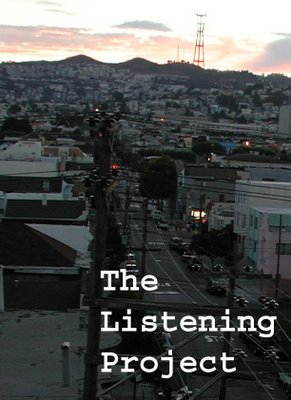